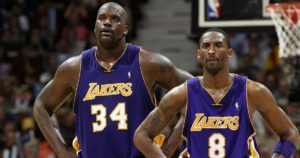 I always found it odd that Kobe Bryant, arguably the greatest basketball player on the planet at one time, never really caught on as a brand the way Shaq did. Why?

The answer is simple. While Shaq understood his superstardom depended upon his connection with the fans, Kobe never took the time to develop a relationship with the people who made him famous. Shaq was your playful older brother. Kobe was a scrooge. You always got the sense with Kobe that he couldn't care less about anybody but himself.

I was delivering a workshop not too long ago when one of the participants came up to me and shared what I believe sums up personal branding perfectly, “You don’t own your reputation. Your community does.” Wow! This is perfectly said.

Shaq went out of his way to engage with his fans. He gave himself fun nicknames – Diesel, Shaq-a-Clause, The Big Aristotle, The Big Cactus when he went to play for the Phoenix Suns, and The Leprechaun when he went to play for the Boston Celtics. Shaq’s great secret was he never took himself too seriously. To him, you could be great at basketball and still have a lot of fun.

Kobe, in contrast, was a mixed bag. No doubt he was a spectacular basketball player. And if things went well you would get the good Kobe. If things did not go as Kobe wanted them to you would get the not so good Kobe. His answers to perfectly reasonable questions would be curt and often full of curse words. Yes, he could get away with it because he was “Kobe.” But the best brands are those who can get away with self-indulgent behavior but wouldn’t dare do it because they know it isn’t right.

Even years after he has been retired, Shaq is still everywhere in commercials and print ads. People still love him.

I notice during the playoffs that ESPN was featuring an online program produced by Kobe wherein he would breakdown the days game. Nothing could interest me less than tuning into Kobe Bryant talking about basketball.

The way I see it is Kobe needs us now. The problem is, when we wanted to have a relationship with him, he wasn’t interested.

I guess the saying is true, “What goes around, comes around.”

Check out these other posts about personal branding:

5 Business Development Tips to Make You a High Performer